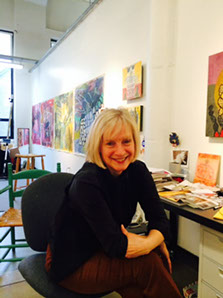 Beverly Ryan grew up in Shippensburg, PA. She holds an M.S. degree from Columbia University and a B.A. from Franklin and Marshall College. She has studied at the Corcoran College of Art and Design with William Christenberry, William Willis and Steven Cushner.

In the 1980’s Ryan was involved in textile design as a weaver and art to wear clothing designer. In the late 80’s her work moved into printing and machine embroidery on fabric and then into more traditional printmaking on paper.

Ryan’s more personal imagery began to emerge as she became involved in printmaking where she spent several years exploring the layering of transparent colors in multi plate monotypes and later in the creation of collagraphs.

Ryan began painting in 1994 in search of a more direct and spontaneous expression of her ideas. She has worked in a variety of painting media, concentrating on oil and encaustic painting for the last 16 years. In 2016, Ryan’s continuing curiosity about materials led her to work with steel. Small welded sculptures have been included in her recent exhibits.

Ryan maintains a studio at the Torpedo Factory Art Center and teaches at The Art League School in Alexandria, VA. In 2017, she retired from ten years as an adjunct in the art department at Montgomery College.

Ryan creates expressionistic figurative work and complex abstracted forms in her paintings. Her work is known for its imaginative subject matter and colorful, painterly surfaces.